Yourban2030 is donating the air-purifying mural called “Naoto” by street artists Solo and Diamond for the first “birthday” of a gym that was reclaimed from the Mafia. Our special guest: the boxer Emanuele Blandamura, two-time European Champion and challenger to the WBA world title.

Yourban2030 is continuing its ethical mission of emphasizing land and public reclamation by once again presenting a work of pro-environmental street art: the walls of the Gym of Legality will be given over to two paragons of artistic excellence, the street artists Solo and Diamond.

This remarkable fusion of ethical and aesthetic distinction was presented on February 26, 2020 on the coast near Rome to celebrate the first anniversary of the gym’s reclamation from the Mafia and its return to the people of the Lazio Region.

The air-purifying mural was consecrated inside the 1,200 m2 building in Ostia. And since the room is intended for boxing, who better to appear on the wall than a 4x4 version of Tiger Man—known in Italy as “Uomo Tigre”—depicting the sport as a tool for training, education, rebirth, and integration...but also as a fight against poverty, a recourse for the weak, and a vehicle for social inclusion. 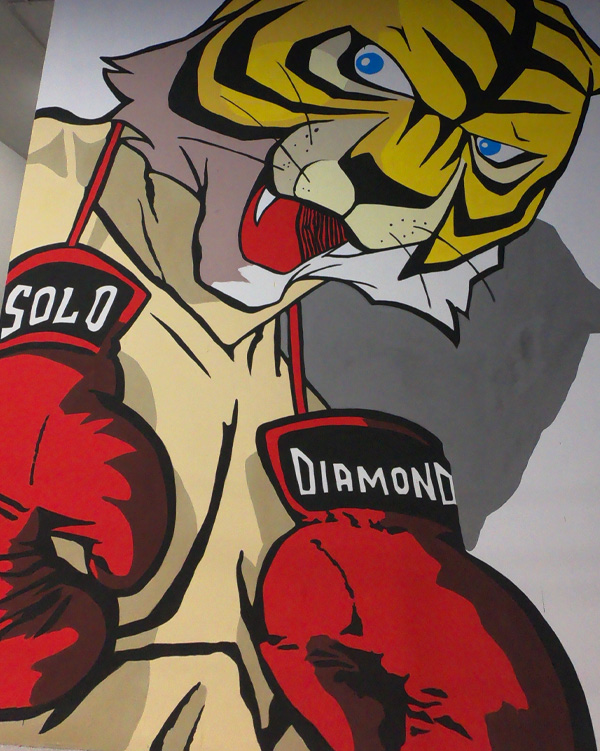 THE IMPORTANCE OF INVESTING IN SPORTING DISCIPLINES

The 51-year-old anime character Naoto Date—aka Tiger Man—will grace the walls and preside over young boxers, reminding us how important it is to invest in sports as a valid avenue for children.

The mural of the legendary Japanese boxer will be donated to the gym by Yourban2030, with a very special guest who embodies the blend of drive, ethics, commitment, and consistency that sports can develop: the Italian boxer Emanuele Blandamura, two-time European Champion and challenger to the WBA world title.

GROWN IN THE "WITHOUT INTERNET" ERA

“Growing up in an era without internet,” Solo said, “Diamond and I are deeply convinced that more than anything else, in-person contact and experiences are vital to instilling new thoughts and reflections, which can sprout and bring an individual to new paths, cultivating or deepening new values. ​​This is what happened to us and many others like us, who grew up seeing art appear spontaneously on the street, before the invasion of social networks and ‘pages’ of street art. And therefore, consciously and unconsciously, we continue to paint in the streets—subtly veiling the content of our paintings in the conviction that they will whisper something in the ears of those who lift their gaze and spend a second of this hectic life looking at them.

“I, using comics and characters borrowed from pop culture, and Diamond, using aesthetic nuances that come directly from Art Nouveau—we try to express what our beliefs and values ​​are, making them resound in the notes of the place that hosts us—be it a small town in the province of Lazio, or a small town in the middle of Russia, or a gym in Ostia.

“By mixing our message with the particularities of a space, we try to make it reach as many people as possible by speaking their language.” 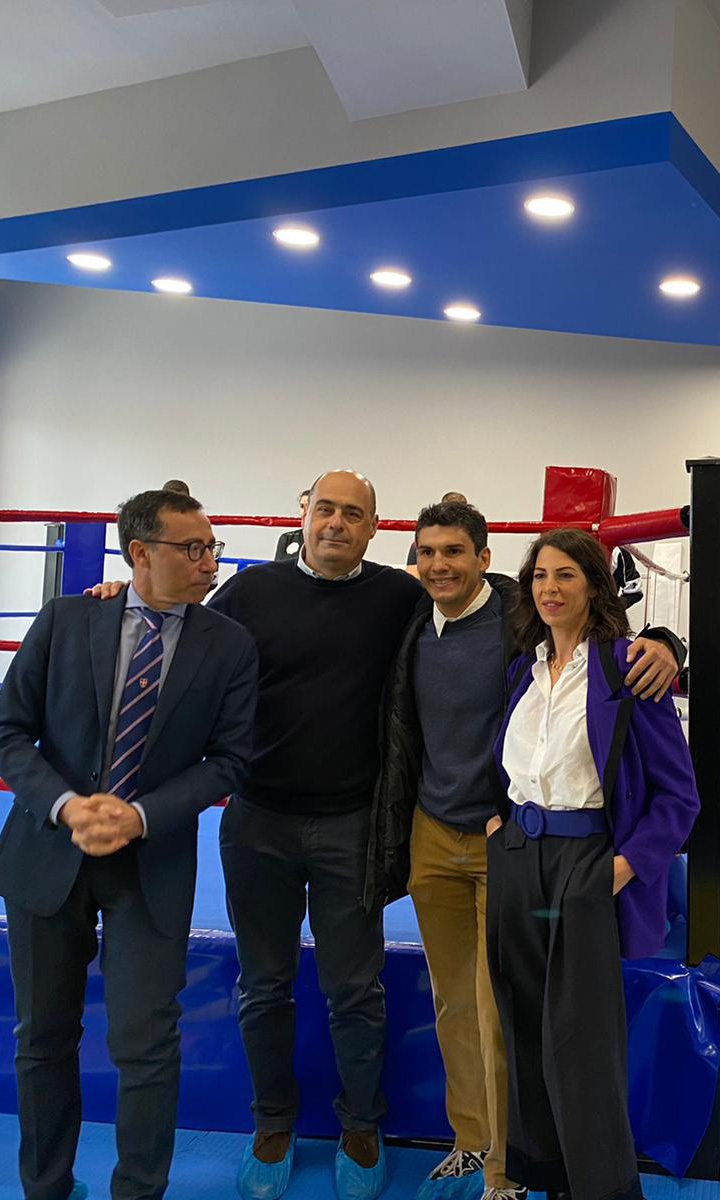 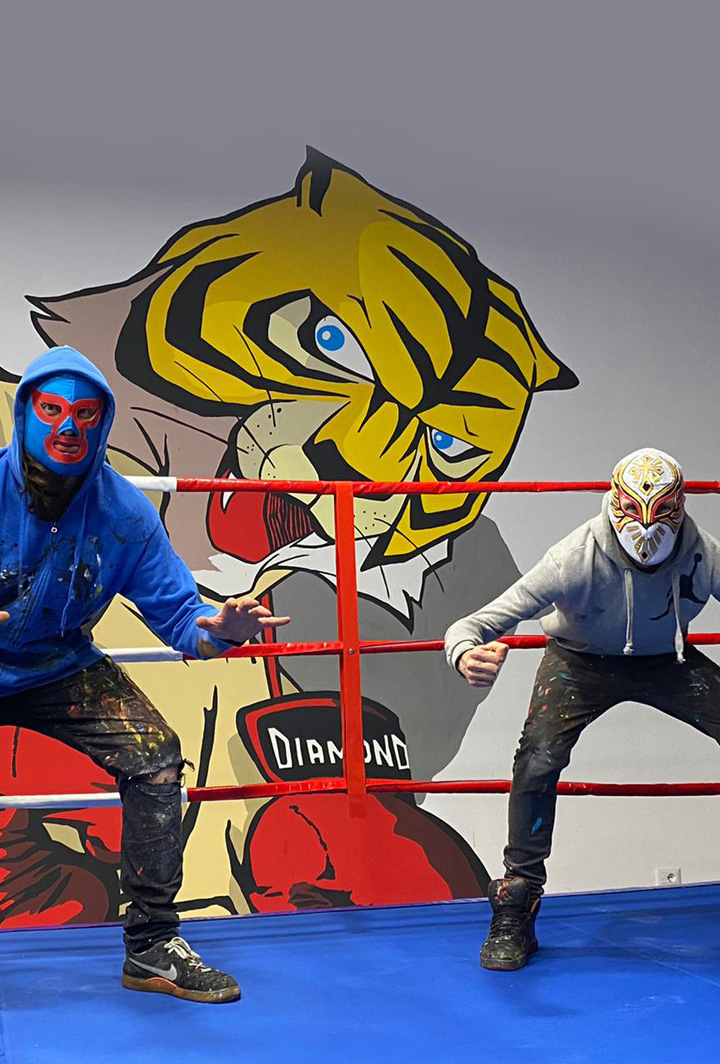 “On this occasion more than ever, we could not fail to give voice to one of the characters to whom we are most closely connected, one who has taught us the meaning of words like sacrifice, tenacity, honesty...the list goes on.

“NAOTO DATE—known throughout Italy as L'Uomo Tigre—is certainly a character belonging more to our generation than to the current one, but by no means does that make his values outdated. Indeed, today more than ever, the values embodied by Uomo Tigre, in a society at times superficial, self-centered, and disposable, have reason to be shared, reaffirmed, and taught, always and to everyone.

“What better opportunity to paint such an important symbol than in a gym frequented by teenagers and kids, with the hope that those who already know Uomo Tigre will remember his teachings daily, and those who do not know him will be curious to get to know him through manga and gorgeous animation.”

For the murals, ecologically innovative Airlite paint was used, which has extraordinary air-purifying capabilities, especially vital in a space populated by athletes. In fact, in addition to its ability to neutralize some pollutants from vehicular traffic, Airlite works indoors to cleanse the air of dirt, smoke, odors, viruses, and bacteria. 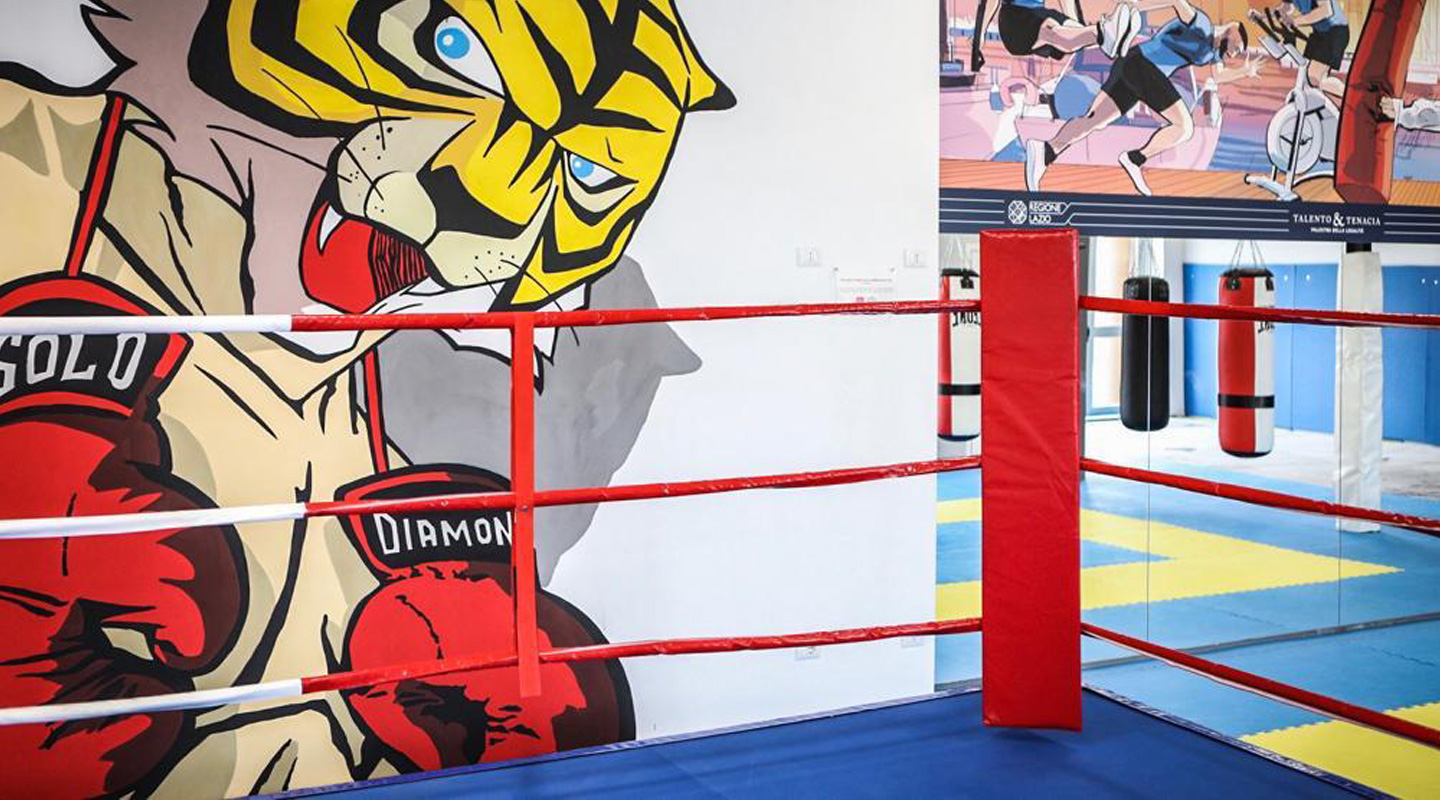 The words of the protagonists

OPEN AND INCLUSIVE SPACES THAT WELCOME AND SAVE.

“Yourban2030,” said President Veronica De Angelis, “wishes to donate this artistic intervention within the space of the Gym of Legality in support of the extraordinary work done here, because these are the gyms of life that allow you to escape the reality of the street. Open and inclusive spaces that welcome and save. Just as there is a Gym of Legality, our dream, and our message with this work by Solo and Diamond, is to give life to the gyms of culture, with free access to art, in which people can aspire to beauty—even those who don't otherwise have the chance, who cannot afford it. Because beauty, like sports, can speak to one’s soul and represent an alternative, real, concrete, and tangible path to changing one’s destiny.”

“I do not count the victories but the defeats that I have won”: This is how champion Emanuele Blandamura has spoken several times. “Sports saved my life, taught me to live. Sports have value—they taught me everything—and I would like this mural to speak to institutions and at the same time to children. To the institutions to say how much initiatives such as those of the Gym of Legality go far beyond sports, affecting the social development of an area and its community. And also to young people, to show how sports can be an alternative to the more destructive pressures to which they often fall victim. We must never give in to the easier choice that the road offers us, but fight to overcome ourselves...and win our defeats.”

WE ARE ALWAYS LOOKING FOR NEW CHALLENGES

If you want to learn about our work and projects, or if you simply want to share your opinion, feel free to contact us: